Catholic Mass Readings for January 21 2020, Memorial of Saint Agnes, Virgin and Martyr, Tuesday of the Second Week in Ordinary Time 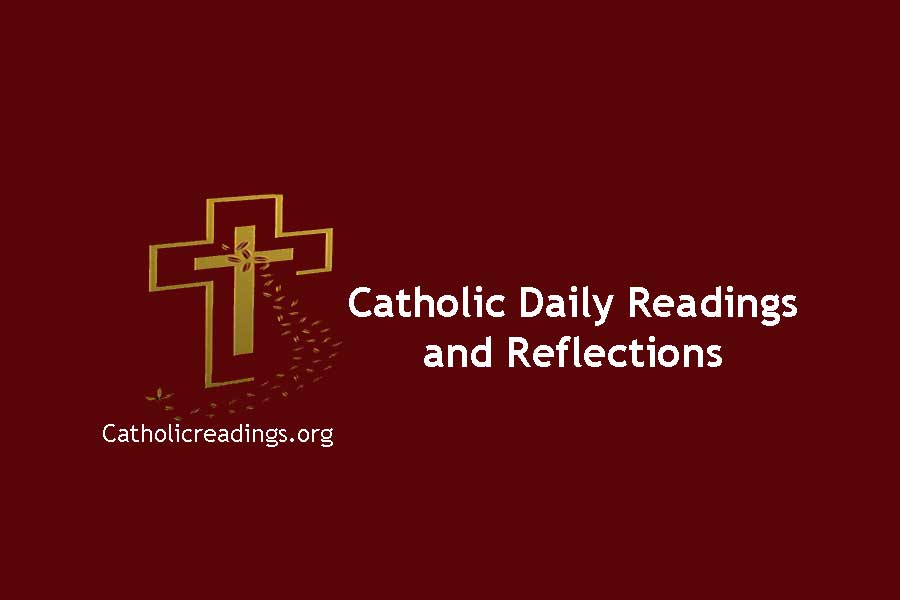 How Well Do You Know our Catholic Saints? Well! Play this Trivia to Know!!

1 The LORD said to Samuel: “How long will you grieve for Saul, whom I have rejected as king of Israel? Fill your horn with oil, and be on your way. I am sending you to Jesse of Bethlehem, for I have chosen my king from among his sons.”

2 But Samuel replied: “How can I go? Saul will hear of it and kill me.” To this the LORD answered: “Take a heifer along and say, ‘I have come to sacrifice to the LORD.’

3 Invite Jesse to the sacrifice, and I myself will tell you what to do; you are to anoint for me the one I point out to you.”

4 Samuel did as the LORD had commanded him. When he entered Bethlehem, the elders of the city came trembling to meet him and inquired, “Is your visit peaceful, O seer?”

5 He replied: “Yes! I have come to sacrifice to the LORD. So cleanse yourselves and join me today for the banquet.” He also had Jesse and his sons cleanse themselves and invited them to the sacrifice.

6 As they came, he looked at Eliab and thought, “Surely the LORD’s anointed is here before him.”

7 But the LORD said to Samuel: “Do not judge from his appearance or from his lofty stature, because I have rejected him. Not as man sees does God see, because he sees the appearance but the LORD looks into the heart.”

8 Then Jesse called Abinadab and presented him before Samuel, who said, “The LORD has not chosen him.”

9 Next Jesse presented Shammah, but Samuel said, “The LORD has not chosen this one either.”

10 In the same way Jesse presented seven sons before Samuel, but Samuel said to Jesse, “The LORD has not chosen any one of these.”

11 Then Samuel asked Jesse, “Are these all the sons you have?” Jesse replied, “There is still the youngest, who is tending the sheep.” Samuel said to Jesse, “Send for him; we will not begin the sacrificial banquet until he arrives here.”

12 Jesse sent and had the young man brought to them. He was ruddy, a youth handsome to behold and making a splendid appearance. The LORD said, “There anoint him, for this is he!”

13 Then Samuel, with the horn of oil in hand, anointed him in the midst of his brothers; and from that day on, the Spirit of the LORD rushed upon David. When Samuel took his leave, he went to Ramah.

20 Once you spoke in a vision,
and to your faithful ones you said:
“On a champion I have placed a crown;
over the people I have set a youth.”
R. I have found David, my servant.

23 As Jesus was passing through a field of grain on the sabbath, his disciples began to make a path while picking the heads of grain.

24 At this the Pharisees said to him, “Look, why are they doing what is unlawful on the sabbath?”

25 He said to them, “Have you never read what David did when he was in need and he and his companions were hungry?

26 How he went into the house of God when Abiathar was high priest and ate the bread of offering that only the priests could lawfully eat, and shared it with his companions?”

27 Then he said to them, “The sabbath was made for man, not man for the sabbath.

28 That is why the Son of Man is lord even of the sabbath.”

How Well Do You Know our Catholic Saints? Well! Play this Trivia to Know!!

How Well Do You Know and Understand our Prayers? Well! Let's See How! Play this Trivia Now

Catholic Daily Reflections - Sabbath Was Made For Man, Not Man for Sabbath – Mark 2:23-28

“The sabbath was made for man, not man for the sabbath. That is why the Son of Man is lord even of the sabbath.”

This statement spoken by Jesus was said in response to some of the Pharisees who were criticizing Jesus’ disciples for picking heads of grain on the Sabbath as they walked by the fields. They were hungry and did what was natural to them.

However, the Pharisees used it as an opportunity to be irrational and critical. They made the claim that by picking the heads of grain, the disciples were breaking the Sabbath law.

First of all, from the point of basic common sense, this is silly. Would our loving and all-merciful God really be offended because the disciples picked heads of grain to eat as they walked by the field? Perhaps a scrupulous mind may think so, but every bit of natural common sense should tell us God is not offended by such an action.

Jesus’ final statement about this sets the record straight. “The sabbath was made for man, not man for the sabbath.” In other words, the whole point of the Sabbath Day was not to impose a scrupulous burden upon us; rather, it was to free us to rest and worship. The Sabbath is a gift from God to us.

This takes on practical implications when we look at the way we celebrate the Sabbath today. Sunday is the new Sabbath and it’s a day of rest and worship. Sometimes we can look at these requirements as burdens. They are not given to us as an invitation to follow the commands in a scrupulous and legalistic way. They are given to us as an invitation to the life of grace.

Does this mean that we do not need to always attend Mass and rest on Sundays? Certainly not. These precepts of the Church are clearly the will of God. The real question has to do with the way we look at these commands.

Rather than falling into the trap of seeing them as legalistic requirements, we must strive to live these commands as invitations to grace, given to us for our own well-being. The commands are for us. They are required because we need the Sabbath. We need Sunday Mass and we need a day to rest each week.

Reflect, today, upon the way you celebrate the Lord’s Day. Do you see the call to worship and rest as an invitation from God to be renewed and refreshed by His grace? Or do you see it only as a duty that has to be fulfilled. Try to take on the right attitude, this day, and the Lord’s Day will take on a whole new meaning for you.

Prayer: Lord, I thank You for establishing the New Sabbath as a day to rest and worship You. Help me to live every Sunday and Holy Day of Obligation in the way You desire. Help me to see these days as a gift from You to worship and to be renewed. Jesus, I trust in You. Amen.

Use the Form below to Send these Catholic Daily Readings to WhatsApp or Facebook (Person, Page or Group)