Agnes Murgor’s full name is Agnes Kalekye Murgor. In the professional circles she is referred to as Hon. Lady Justice Agnes kalekye murgor.

Agnes Kalekye Murgor was born on 15th August 1963 in Machakos County.She is the Second born in a family of four.

Her brother is the former Principal Secretary for Transport Nduva Muli.

She is now a judge of the Court of Appeal in Kenya.

She attended Alliance Girls High School for both her ‘O’ and ‘A’ levels.

After High School she joined the University of Buckingham in the UK from where she graduated with honours’ in 1987.

From the UK she joined the Kenya School of Law and the following year was admitted to the Roll of Advocates.

In 2005, She enrolled with the University of London for an LLM in International Business Law.

After Kenya School of law, Agnes did her pupillage at Hamilton Harrison and Mathews. Thereafter she opted for employment as a State Counsel in the Office of the Attorney General in the Treaties and Agreement.

In July 2007, Agnes took up an appointment by Diageo Plc, and appointed to serve as EABL’s Group Legal Counsel, and Company Secretary.

She is now a judge of the Court of Appeal in Kenya.

Agnes Kalekye Murgor father was the late Justice Mathew Guy Muli, a distinguished Kenyan jurist served as Legal Counsel to the East African Community, Judge of the High Court, Judge of the Court of Appeal, Attorney General of the Republic of Kenya and finally retired to private practice, before his passing in 2004. Her mother is Evonne Muli. 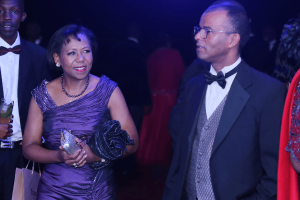 In 1990, Agnes Kalekye got married to her sweetheart Philip Murgor who was then a State Counsel in the Public Prosecutions Department of the State Law Office.

Agnes and Philip have three children. Cherono, Kibet and Chemeli.

She also has shares in her Late fathers company, Mukengesya Holdings Limited. The company manages the family properties which include acres of beach plots in Malindi and houses in Komarock Estate, Garden Estate, Kangundo and Tala.