He is the first Speaker of the modern Kenyan Senate after being elected on 28 March 2013.

Speaker Ethuro attended Lokori Primary School and after completing primary level in 1977, he joined Lodwar High School from 1978 to 1981. He joined The Alliance High School for his A levels in 1982.

Ekwe joined the University of Nairobi for his BSc degree in agriculture. and graduated in 1988 becoming the fourth person from Turkana District to get a University Degree. He also holds an MSc degree from the Clemson University, South Carolina, United States.

In 1992, Ethuro joined Kari as a policy analyst on livestock issues. In 1993 Ekwe served as a deputy country representative for Oxfam and as a research scientist for the Kenya Agricultural Research Institute 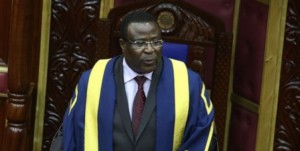 Ekwe was first elected to Parliament as the Member for Turkana Central in the 1997 General Election. Following that election President Moi appointed him as the Assistant Minister for Planning and National Development where he served from 1998 to 2002.

He was among key members of Parliament that actively and successfully mid-wifed the Constitution, and served as a member of the Constitution Implementation Oversight Committee.

He has served as the chairperson of the parliamentary committee on CDF for two terms of Parliament from 2002 to 2012.

Ethuro played an active role in the Amani Forum which was a Great Lakes regional parliamentary peace initiative that mobilised MPs and involved them in peace forums following the 2007 post-election violence and stalemate that came about from the presidential election result, which was disputed by ODM. As the chairman of the forum, and with the facilitation of Parliament, he convened an urgent meeting of MPs and dispatched various teams to the grassroots to preach peace, an initiative that contributed to calming down the political temperatures at the time.

He has also served as a member of the Procedures Committee, which deals with the Standing Orders of Parliament.

In 2012, Ethuro and three other members of parliament from Turkana county were summoned by the CID director to shed some light on what they knew about the murder of 41 police officers in Suguta Valley.

Along with Turkana South MP Josephat Nanok, Ekwe Ethuro was charged with incitement to violence, becoming the second set of leaders to be put in the dock over the Baragoi killings. They appeared before chief magistrate Waweru Kiarie but did not plead to the charge, claiming it was a violation of their rights and an abuse of the judicial system.

The two MPs were released on a cash bail awaiting a ruling on whether to refer the matter to the High Court. The court later dismissed the incitement case against the two Members of Parliament.

Through lawyers Katwa Kigen and Jotham Arwa, the legislators claimed that the charges raised constitutional issues and asked the magistrate to suspend the plea and refer the matter to the High Court for interpretation.

In the first round of voting, Ethuro garnered 35 votes, which was less than the two-thirds needed for a win, while Farah got 31 votes.

Ekwe Ethuro’s parents were among the first Christian converts in Turkana. They constantly advised him on the importance of the ‘white man’s education’ and how it could mean a better future, he went ahead to do exactly as they wished.

His father was a polygamist with a large family of 15.

Ekwe Ethuro has no real quality relaxation time. Whether at home or with his folks enjoying nyama choma, politics always pops up as the subject of choice. He tries once a year in April to ‘steal’ at least one week to go on holiday with his family to a destination of his choice.