Prof. Githu Muigai is the Attorney General of the Republic of Kenya from 2011.

From 1980 – 1984 he enrolled for a Bachelor’s Degree in Law at the University of Nairobi. Thereafter he went to the Kenya School of Law from 1984-1985 for his Diploma in Legal Practice (Dip Law).

Prof. Githu Muigai was awarded a doctorate degree in law in 2001.

Prior to becoming Attorney General, Prof. Githu Muigai served in the defunct Constitution of Kenya Review Commission and at the United Nations as Special Rapporteur on contemporary forms of racism, racial discrimination, xenophobia and related intolerance

Prof. Githu Muigai was an associate professor of public law at the University of Nairobi School of Law. 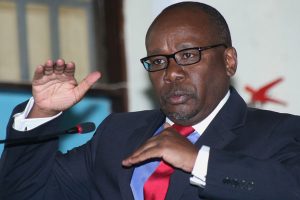 He also serves as a managing partner in the Kenyan law firm of Mohammed Muigai Advocates, where he specializes in commercial litigation and arbitration, as well as in constitutional and administrative law.

From 2008 to 2011, Prof. Githu Muigai worked in the Office of the United Nations High Commissioner for Human Rights as the special rapporteur on contemporary forms of racism, racial discrimination, xenophobia, and related intolerance.

Also since 2008, he served as a Judge in the African Court of Justice.

Prof. Githu Muigai is a lawyer, Associate Professor at the University of Nairobi. He is currently on leave of Absence in order to serve as the AG.

He has researched and published extensively in the areas of international law, constitutional law and human rights and has previously worked as a consultant to various international organizations, including the African Union, UNDP, the World Bank and the ICRC.

Prof. Githu Muigai Assumed office 27 August 2011 as the Attorney General of the republic of Kenya after being Appointed by Former President Mwai Kibaki.

Prof. Githu Muigai is married to Justice Margaret Waringa Muigai a judge of the High Court who was appointed by Chief Justice Willy Mutunga in 2014.

Githu Muigai and Margaret Waringa together have 3 grown up Children.

While Prof. Githu Muigai will enjoy his perks as agreed at the time of his joining the public service, any future entrant into the same position will have his or hers governed by the terms set by the SRC.

For the position of A-G, future holders will earn Ksh. 792,000 a month. Prof Githu Muigai’s total perks, as disclosed in the Kenya Budget Estimates amounts to Ksh.3.3 million a month.

“The man in front of you today is a mortician, The patient died on the operating table. If you think the patient should have lived, ask the surgeons”

“If you ask me, I do not know any other state that has cooperated more with the Court than Kenya”

“Peddling unsupported claims based on paranoia, misunderstanding or false conclusions”

“Prosecutors cannot parade in the garments of the court, invoking powers they do not have”

“Mathew Muli, the then Attorney General – we cannot call him anything else because that was his official title- tried to keep his knowledge of the law concealed. His only acquaintance with the law was incidental or historical”

“I am here to jumpstart your mind from lethargy”

“I believe you are familiar with carnal knowledge? The concept that is, not the practical part. Someone with experience? Legal experience you dirty minded fools!”

“God asked him, ‘Who are you?’ and he replied ‘I’m Jomo Kenyatta, President of Kenya and you’re sitting on my chair!’” (Trying a hand at stand up comedy)

“We are not authorities in law. By ‘we’ I mean ‘you’. Some of you might be tempted to think that we are in the same category”

“When I ask you a question, give me an answer in the context of the 21st Century because that is where your challenges lie. Don’t give me an answer according to your grandfather because he is either dead or dying”

“Killing is a statement of fact, but murder is a conclusion of the law”

“This gentleman, and I use the word gentleman with the widest elasticity possible, always acted ex cathedra”

“What a pretentious name!” (When some guy called Muthee was asked what his name was)

“You call me Sir and I call you Sir. The only difference is that YOU will mean it!”

“Not even the devil knows what a man is thinking, leave alone a woman”

“If I was to be appointed the Chief Justice, which I think would be a terribly good idea, I would listen to everybody, including you, for whatever it is worth…”

“I agree with the Honourable Justice Kwach, that the legal profession is in danger of being infiltrated by peasants”

“For the purposes of my lectures, all time will be in GMT and only my Swiss watch will apply”

“That is a very stupid answer, but it is the right one”

“If your female client is going to be convicted of murder, make sure she’s pregnant. Why are you laughing? Of course, I don’t mean that you should be the one making sure!”

“Bigamy is the only crime where two rites make a wrong”

“Robbery With Violence… now that is a good example of how not to make a law. It is pure nonsense and tautological”