Justice Isaac Lenaola, Judge of the Supreme Court of Kenya

Justice Isaac Lenaola was born on 21st December 1967 in what is now Samburu County.

Before joining the Supreme Court of Kenya, Justice Isaac Lenaola was the presiding judge of the Constitution and Human Rights Division of the High Court and was deputy principal judge of the East Africa Court of Justice.
Justice Isaac Lenaola successifully joined the Supreme Court in late 2016 after a lengthy interview to fill the vacant positions left by Justice Philip Tunoi and Justice Kalpana Rawal who had attained the mandatory judicial retirement age of 70 years.

Justice Isaac Lenaola begun his education in 1973 at St. Mary’s Nursery School in Maralal. In 1974 he attended Maralal D.E.B. Primary School then moved to Baragoi Primary School where he sat for his C.P.E examinations.

He joined Alliance High School for his O-Levels studies and A-levels from the year 1981 to 1986. He was awarded the Gandhi Smarak Nidhi Award for the best possible achievement in A-Levels in Kenya.

In 1987, Justice Isaac Lenaola joined the University of Nairobi for his LLB (Bachelor of Laws) studies and graduated with a Second Class Honours Upper Division in 1990.

In 1990, he joined the Kenya School of Law until the following year when he was admitted to the Bar. 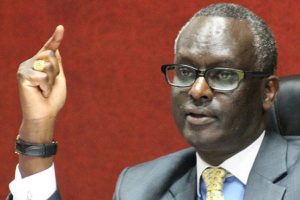 In 1999 he became a Partner and Head of the Litigation Department at the firm of Maina Wachira & Company Advocates. until 2003.

He served as the Secretary–General of the Asat Welfare Society and as the Chairman of the Legal Affairs Sub-Committee of both the Olmaa Development Association and the Kenya Pastoralists Forum.

Justice Isaac Lenaola has served as a consultant for the World Bank, the Arid Lands Management project, Oxfam and the International Union for Conservation of Nature on issues of land and resource management and conflicts in pastoralist regions.

With the quest for the new constitution gaining momentum in the late 1990s, Justice Lenaola joined hands with the progressive forces. In 1999 he was appointed a Commissioner with the Peoples Commission of Kenya, a civil society driven constitutional reform process until 2001.

Justice Isaac Lenaola was appointed as a High Court judge in October 28, 2003. He served as a Resident Judge in Embu, Meru, Machakos and Kakamega.

On judicial administration, Justice Isaac Lenaola served as a Commissioner in the Judicial Service Commission (JSC) between the year 2010 and 2013.

At the international level, from July 2011 Justice Isaac Lenaola has served as the Deputy Principal Judge of the Court of First Instance of the East African Court of Justice.

He was a Member of the Tribunal Investigating the Conduct of Puisne Judges following the “radical surgery” of the judiciary in 2003.

He currently sits in the board of the Kenya Judicial Training Institute. 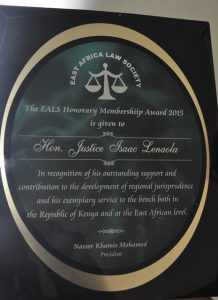 On 17th December, 2015  CJ Willy Mutunga presented an honorary membership award to Justice Isaac Leonala on behalf of East Africa Law Society (EALS). This is in recognition of his outstanding support and contribution to the development of regional jurisprudence and his exemplary service to the bench both in the Republic of Kenya and at the East African level.

Currently, Justice Isaac Lenaola is a Judge of the Supreme Court of Kenya presiding judge of the Constitution and Human Rights Division of the High Court and is deputy principal judge of the East Africa Court of Justice.